This week’s Project Spotlight is on Bake It Up, which aims to improve the self-esteem of young people by allowing them to get creative in the kitchen and achieving something they can be proud of. Volunteers run two after school clubs, which enable participants to develop new skills, learn to work as a team and gain knowledge about various ingredients and foods.

This term, I joined a session at Sydenham Primary School in Leamington Spa. On Wednesday at 2pm, the volunteers met at the Warwick Volunteers project room in SUHQ, and then went to the bus interchange together to catch the bus.

Upon arrival, we went to a canteen-like area, where we started preparing the baking ingredients, such as eggs, flour, butter, chocolate, bowls etc. I was excited about the recipe – chocolate velvet cupcake, yum! The pupils were split into four groups, each consisting of around six pupils and two volunteers.

I was amazed to see the children chatting away with the volunteers, sharing what they have done in school. The pupils were very welcoming and they seemed excited to bake! After explaining the baking steps, the volunteers guided the pupils in measuring and mixing the batter. Some pupils may require more support on using the weighing machine to weigh the ingredients. The pupils took turns to mix the batter and scoop it into the baking tray. 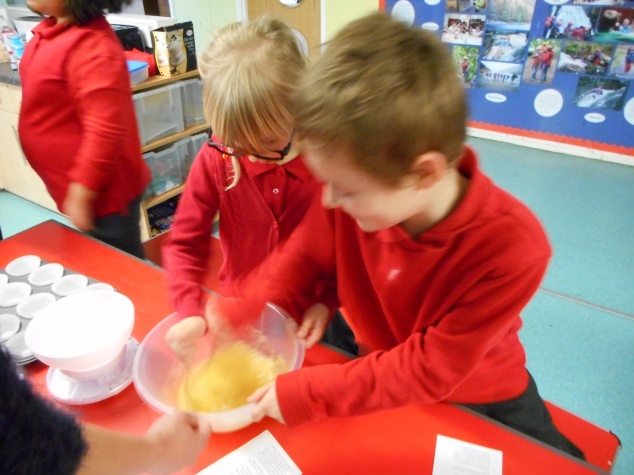 While waiting for the cakes to be baked in the oven, we proceeded with making the icing. Alternatively, there were some heart-shaped cards for the pupils to decorate, to keep them occupied in the time being.

When the cupcakes were ready, the children were free to decorate them with icing and sprinkles. They then happily indulged in them or took them home. The session usually ends at around 5pm, when we clean and pack up. However, since there were some issues with the oven, it prolonged our baking duration, as we needed to bake in batches. As a result, we left the school at 6:15 pm.

Although it could be hectic at times, the ambiance was cheerful as we were surrounded with energetic primary school kids. If you are lucky, you get to have a share of the cakes as well!

Bake It Up will run again next academic year! To get involved, you can sign-up to the project at our Volunteering Fair in Term 1 Week 1. Meanwhile, visit the project page to find out more!